One of the best games we used to play during our childhood was tic-tac-toe. Oh I am sorry, did I say our ‘childhood’? I meant, one of the best games to have existed all our life is tic-tac-toe and while you probably mastered many tricks in order to gain victory or at least a draw in your regular games, this particular application takes it to a whole new level. 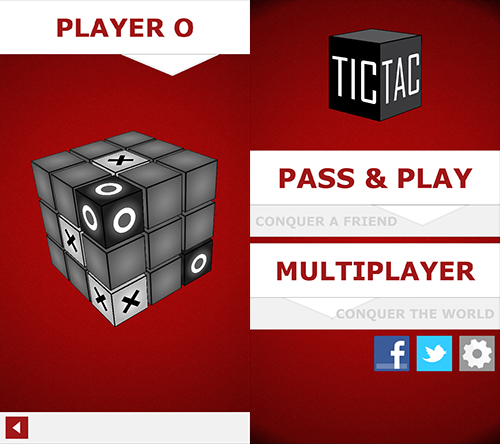 Tic Tac Cubed takes the concept of playing around with your friends to a whole new level. You can actually play this game with a bunch of people at the same time. Tic Tac Cubed is still in its Beta phase but thanks to a member of XDA forums, it certainly is a fun way to kill some serious time. It is just like your regular tic-tac-toe game but the only differences is that instead of you playing it on a 2D grid, you play it on a cube which is similar to a Rubix cube if you like. It has six faces obviously and therefore you will be playing six games of tic tac toe at the same time. That’s not the only thing of course. You could have played against six people anytime you wanted. The developers have added different power-ups that you can use to annoy the hell out of your opponents. The application also features an online feature which will allow you to play online with friends in your contacts list or even total strangers. Since we already mentioned that the game is in its beta phase, one thing you should know is that when the final version of the game comes out you will not be able to use as many power-ups. According to the developers, only one or two power-ups will be handed out in the final version at the beginning.

Also, if you are using the Beta version of the game, many things will be disabled until of course the final version of the game is released. Before the game is released of course the developers will be straightening out any bugs or fixes that are necessary in order to give you the best possible experience with the game. The game is all set to be updated regularly in order to offer more features and likes. If you haven’t already tried the game, please hop over to the original thread of the game in order to check on the progress or otherwise please click here to download the latest version as of now. Let us know what you think in the comments below.