Yesterday, Apple rolled out the patch for PDF exploit and JailbreakMe by releasing iOS 4.0.2 firmware. All those users who would immediately like to protect their phones can go on and update the firmware but they will not be able to jailbreak their phones till the release of another jailbreak tool. Meanwhile, the iPhone dev team is doing something that Apple didn’t.

The firmware rolled out yesterday abandoned iPhone 2G and iPod Touch 1G users even though Apple acknowledges the severity of the hole. iPhone dev team is packaging an updated version of Cydia which will cover this up for all versions of iPhones including iPhone 2G and iPod Touch 1G users. The coding has been done and the the package is undergoing testing right now and shall be shortly available. 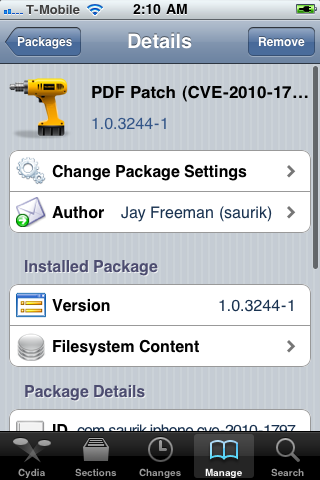 So, there’s no reason why jailbroken users should be updating to the iOS 4.0.2. Sit tight with 4.0.1 and enjoy the jailbroken phone.