Sometimes when you are wandering around YouTube you tend to end in the weird area of YouTube that is filled with ‘interesting’ videos. I for one always find myself wondering exactly how I always end up in that area. Anyway, you might have come across videos that basically show a person growing and changing over the years and while the idea might have seemed interesting to you, you probably forgot about it in a few days. That is to say, if you ever thought of making one chronological video of yourself. There is an application available for your Android smartphone which can help you do that which minimal effort. Thanks to a member of XDA, if you are looking to have some fun, you might want to give a shot to PhotoChron. 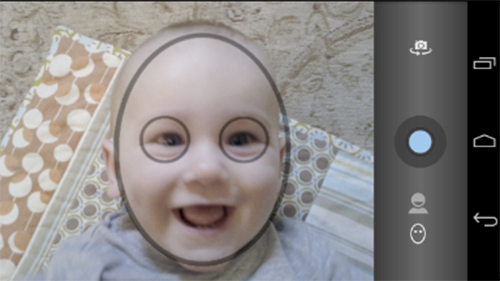 PhotoChron is a very basic application that will help you create your photo chronology with minimal effort on your part. The interface is easy to grasp, pretty straight forward and quite intuitive too. PhotoChron has an in-built camera app which you will be using to take a picture; the reason being that it has its own perks if you may. Since the application is based around the face, you have the option to toggle a guiding facial visual (pretty much like a grid) which would then overlay the grid on the face allowing you to take accurate pictures. You can also have a previous photo that you might have taken overlaid on the newer one that you are about to take. You have four buttons at the bottom offering the following actions:

So, there are chances that you might forget to take a picture or something like that. Well, the developers were thoughtful enough to throw in a notification reminder which can remind you to take pictures on a daily, weekly or monthly basis, whichever you prefer and that of course can go on to be years. This particular application is available for free on the Google Play Store and is compatible with devices running Android OS 2.3 or higher. If you are looking for more information on this application you might want to visit the original thread by the developer. One thing you must know is that this is a long process, so you might want to be patient. Let us know what you think.