Windows 8 seems to be in the pipeline and now even 2012 release doesn’t seem to be a distant reality. Windows 8 Build 6.2.7959.0 Milestone 3 (M3) is third of its kind leak available through different file sharing networks and off course on popular torrent trackers. Past month we saw two leaks i.e., Build 6.2.7955.0 and Build 6.1.7850 which were also available to those who were not invited to test.

The latest development milestone is different than the others as its a Server release while those were the client releases. As Windows 7 and Windows Server 2008 shared the same core / kernel, same is expected with the Windows 8.

People at Redmond are extremely tight lipped about the release of its much awaited operating system, which is not strange knowing their past record. The screenshots I got hold off showed “shh.. let’s not leak our hard work” in the background which I believe was not meant for us instead it was for the employees and the testers.

Still, after the success of its flagship windows 7 and seeing how Microsoft entered in the ongoing Apple-Google mobile OS battle with Windows Phone 7, we believe something bigger and better is in the works. 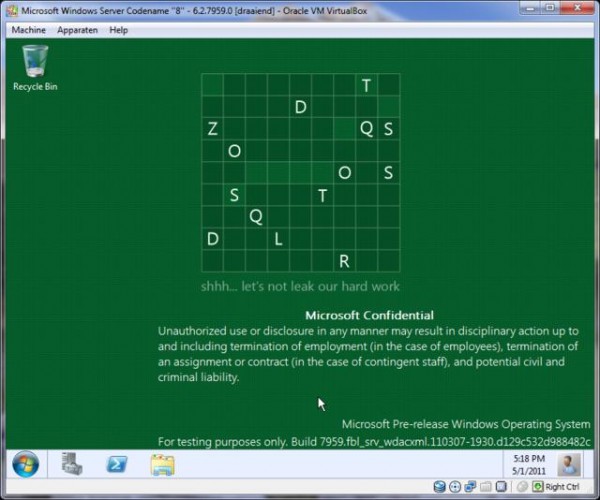